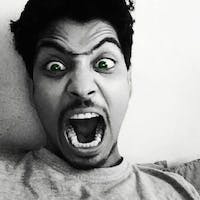 I had an eureka moment, out of nowhere. In that moment I realised this:

Of course, I am not the first person to do this. I am sure many of you use something similar too. Right? Anyway continuing with the the story; I was half asleep, (on a wednesday night. Again!), and needed to update a file, so I did this:

So far so good. And, all systems were normal, so my brain decided to get more sleepy. I dozed off for a couple seconds and I typed this:

I did not realise my mistake because it freaking did what I wanted. It has shown me a diff. I couldn't care more, and I continued to drift into my subconscious. And here is what I typed:

Yes, people yes. I had managed to mistype a command in a new way, yet one more time. And the best part is, it worked without any fuss! And continued to drive under influence, oblivious to what was happening with this next one:

But then, of course I woke up. I looked at the terminal, I was shocked and laughed out aloud (quite literally). As I was contemplating my life decisions it dawned to me, this is good. I know it sounds silly and normal, but the bigger picture is the tools that I had chosen to use had helped my ass, and saved me some frustration when I was the most vulnerable. Exhausted and weary. Trying to save some work and be done for the day.

Hope you liked this story. Until the next one (Hopefully on a sleepy wednesday!).